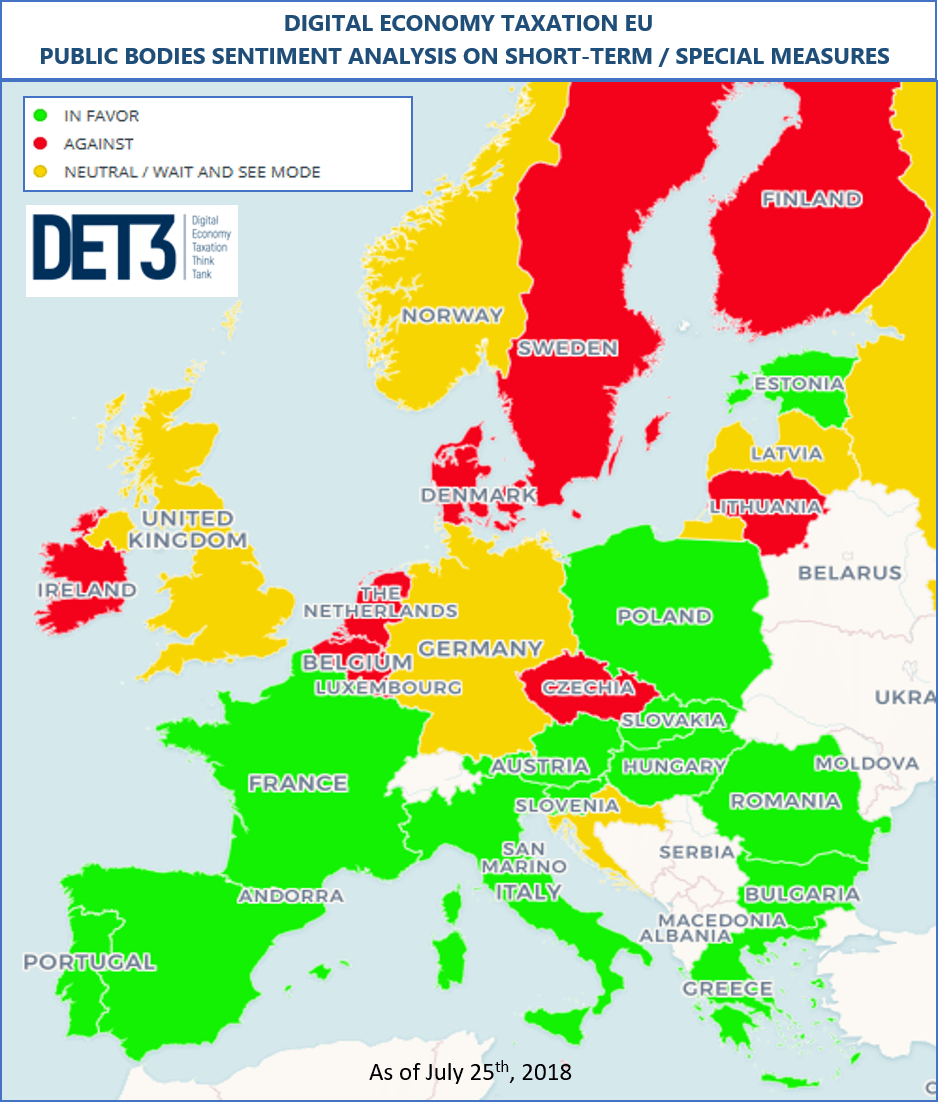 It is a dual fact that the perceived extreme tax optimization strategies of some parties playing in the digital arena have had a profound impact in accelerating and sparking this debate, but also that the other part of the issue is that the international regulatory context was not up to date with the modern digital business models at the required pace.
No matter how it started, it is clear now that since September 2017 the OECD is moving the Digital Economy Taxation agenda at a completely different pace than what it used to be, to catch up with the EU Commission initiatives that are not only at analysis level but translated into specific proposals of Directives.

Being most of the countries in agreement that any policy will need to be devised by large consensus in multilateral institutions at a global level, there is clearly also a list of countries that are determined to act themselves or in small groups if needed while the international consensus is reached.

There seems to be international consensus around the fact that in the long run this should be approached by adapting the current international tax principles to a digitalized world and defining how value is created and what constitutes a digital taxable presence; but on how to do it and with which intensity there is no consensus at all. The EU is the one leading a cruise for more innovative solutions like the CCCTB, but a long-term solution in line to the EU Directive Proposal for a Significant Digital Presence instrument seem to earn much more sympathy at most other Tax Governments level than the CCCTB.

A key divergence nevertheless is about pace of action. Countries reliant on foreign direct investment are concerned about DST impact on their economy, and other countries willing also to reflect with more calm see the ones demanding immediate action as sponsoring protectionist measures that will limit growth and generate double tax. The countries in the other side of those positions are not only willing to see Digital companies paying their fair share of tax and expect an even playing field, but tired of having long international debates where no decisions are taken and the considerations of a few are constantly slowing down the willingness of most to advance. Their sponsorship to the EU DST is in fact an additional level of pressure to accelerate the conversation and decision making at a global/OECD level.

Many countries that are part of the EU Commission think that some of the factors expressed at the beginning of this note undermined the foundation level of the old continent. In this context, Hungary, Italy and Slovakia, have already passed unilateral/uncoordinated measures, and Spain is working now at full engine to do it soon, although as much tied to the EU draft as possible according to our information. Specific countries in Asia, Africa and Latin-America have already passed specific measures also (See our dynamic map for reference). So this is not just about India, whom pioneered this route. By far not; and in this new patch-work of different special/hybrid digital tax names, some countries are taking the tax base concept construction far away too wide.

OECD General-Secretary Mr. Gurria recently confirmed their aim to be ready to produce OECD Digitalized Economy tax proposals in 2019, one year before than initially announced, but few days later Pascal Saint-Amans clarified that the OECD will is seeking to “achieve consensus among countries by 2020, not by 2019” and that the report will be “a final report, possibly including solutions”. In between, we shall witness another interim report in 2019…

The United Nations Tax Committee decided at its last May 2018 meeting that they will not hold off their work on the taxation of the digital economy until OECD releases the new 2020 report, and they will set the focus on topics of interest to developing countries in this area.

In general, this debate has the capacity to produce large impacts in most countries GDP in a few years from now, if not properly resolved, and it is in our view the most important one we have faced in the last 50 years in the international trade taxation agenda.

So indicative and profoundly interesting is the fact that the President of an African country has just had to publish himself and official letter explaining citizens why he had to introduce this same July 2018 taxes on Over the Top Services and Mobile Money Deposits and transfers, clarifying its application. Letter was also published in Social Media…..

Things like that happens because the economic angle is very intertwined with the technical and political and many countries advocate for capital export neutrality and are concerned about the impact of this discussion in their foreign trade.

The political arena around this critical topic is not only a multi-faceted battle-field these days, but one where the swings in political positioning is changing faster than ever and not only confusing the landscape and the public & citizens in general but generating concerns and misunderstandings.
In the UE, we have witnessed some of these recent swings:

Days ago, Norway’s parliament rejected a proposal that the Government examine its digital tax options, resolving that Norway should stay the multilateral course. Nevertheless, at the same time, the parliamentary resolution also urged the Government to assess the suitability of temporary taxes on digital companies and evaluate the possible consequences of introducing a tax on digital companies similar to that proposed by the European Commission in March. The position of their neighbors Sweden, Denmark and Finland is in total opposition to the DST.

In this super unpredictable environment, Spain main political party did not formally support a short-term action plan last March 2018, for proposing it in May 2018 as the concrete needed solution to regain 1,5 €Billion for Spanish budget to cover the just agreed pensions scheme increase. That Government has been suddenly replaced in June by a new temporary one who seems to be holding the same determination to pass a short term Digital Service Tax measure as soon as possible.

Italy’s Ministry of Finance was in June seeking stakeholders’ public feedback on whether to support the EU’s digital tax plans, including the “interim tax” on “otherwise untaxed turnover earned by certain digital economy firms”. Consultation scope was more technical, trying to reconcile the Web tax already passed with the specific text of the EU directive proposals released by the Commission later. Uncoordinated timings based in political agendas are creating issues and rework.

In between, the exiting Bulgarian EU Presidency prepared and shared in mid-June a “compromise text” on the Digital Services Tax, with some adjustments to the initial March Commission proposal, and the new Austrian presidency confirmed this is very high in the Agenda.

Commissioner Moscovici reiterated on June 21st his “commitment to ensure that both (CCTV and Digital Taxes) are adopted as quickly as possible”. Austrian presidency is very supportive of quick progress in EU and OECD long term solution: “EU needs to take strong and unequivocal positions vis a vis its international partners, especially when it comes to taxation of the digital economy”.

France and Germany reported then in a joint statement through Merkel and Macron that they commit to reach an EU Agreement on fair digital taxation by the end of 2018, making a call for it. But the German position, that has been firm as a rock, will probably require a previous stabilization of the local Government to be sustained.

Speaking at the OECD International Tax Conference in Washington last June, Martin Kreienbaum, Germany’s Director General, International Taxation, Federal Ministry of Finance, and Chair, OECD Committee on Fiscal Affairs said that to resolve the worldwide dispute on taxing the digital economy, it is important to first clearly identify the true nature of the problem”. Surprising to hear a statement like this at this stage.

In this context, to be seen if there is a route for enhanced cooperation between the required number of countries in order to pass the Digital Taxation Directive proposal(s). Seems to us that the German final position should carry weight in the position of other undecided countries.

While the UK won’t count for that enhanced procedure, their swing on this topic is also noticeable. After being one of the countries firmly supporting short term action with Germany, France, Spain and Italy, and having flagged the option of introducing a revenue-based tax for digital businesses in their November 2017 policy paper, they might have switch to more cautious position or even opposing, after reconsidering the potential retaliation from big trading partners from the other side of the ocean.

The public bodies sentiment analysis in Europe around the short-term measures / immediate action is fragmented and likely rules out a unanimous decision as the following map illustrates:

In this highly changing landscape, the scenario we manage currently for Europe is a high probability of around 6 countries having passed or passing relatively soon unilateral measures locally and a moderate to high probability of enhanced cooperation that will require at least 9 EU member states.

Going to that other side of the ocean, while some commentators insist in the fact that countries like the US are now taking part in this relevant debate, the US did not participate in the June 9th G7 Summit nor endorsed the joint conclusions of “welcoming the OECD interim report analyzing the impact of digitalization of the economy on the international tax system”.

Pascal Saint-Aman has mentioned last June that there are countries such as the US, “that are open to discussing improvements to the international tax rules for allocating income, but only if the discussion is not limited to taxation of digital firms”. As of today, any “systemic” long term solution will have to affect the whole economy and all sectors, nobody questions that now.
In this past July 21-22, 2018 weekend, G20 Finance Ministers reaffirmed commitment to address this topic by 2020. The US delegation was not immediately available for comment.

Despite the economic turbulences generated internationally by the wide impact US tax reform, a new US Supreme Court ruling is now confirming that no tax inequality should be accepted when it provides an unfair advantage to a non-established in a territory digital player over local suppliers. Exporting the principles of this inter-US stated ruling to the international arena, this has precisely been the reasoning that a relevant number of stake-holders have been requesting as part of the Level the Playing Field key debate. It will be interesting to watch how the seed impact of this ruling develops.

And to make things just more interesting and disjointed, in parallel to these structural debates, on May 24th, 2018, the British Parliament launched a consultation which included the question whether a “robot tax” should be imposed in order to provide help to those affected by automation….what a fascinating summer we face.

From our side, in DET3 we’ll continue the focus on tracking and analyzing the evolution of the international debate on a real time basis, preparing a position paper on the most prevailing topics and keeping regular open contact with the key local and international stake-holders to share our insights.
We are convinced that the unstructured unilateral solutions approach that is emerging is a problem-riddled approach, and we know that the current statu-quo can’t remain, so any measure to increase speed and quality of analysis counts with our support and assistance.

We are happy to announce that Academia will shortly join our initiative, so the Digital-Tax-September-back-to-school will happen even in better company.