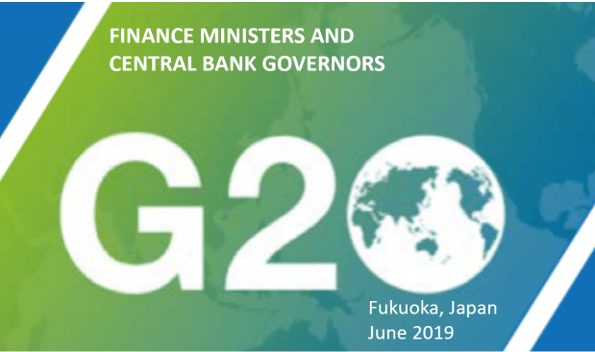 G20 Finance Ministers endorsed during their Japan-Fukuoka meeting in June 2019 the 2 Pillars of the OECD Program of Work structuring the process to achieve a unified approach on digitalized economy taxation.

Further to their message, global growth appears to be stabilizing, with a moderate recovery; However, as growth remains low and trade and geopolitical tensions have intensified, they stated fiscal policy should be flexible and growth-friendly, with continued implementation of structural reforms.
A critical one is indeed the one affecting digitalized economy taxation, where they endorsed working towards a fair, sustainable, and modern international tax system.

They compromised redoubling efforts for a consensus-based solution with a final report by late 2020, as they know the G20 leadership can be instrumental in getting political engagement and compromise.

Considering how the international regulatory landscape is boiling around taxing an economy that has a fast pace and deep digitalization, this endorsement was expected.
The technical and political fronts are going to have to intensively run in parallel during the next months. A clear observation by the Ministers was that political agreement needs to be reached soon on the fundamentals of the solution if deadline is to be achieved. In today’s OECD Webcast, Pascal Saint-Amans mentioned there will be focused work during summer to bring countries or countries/blocks positions together, towards the unified approach.
The secretariat workstream developing the impact and economic analysis will become instrumental here considering standard political clearances and decision making in this field, but some flexibility will be required by the political bodies if progress is to be done as the information will likely be far from perfect. Joint and agile private sector/ OECD inclusive framework collaboration should be very relevant here.